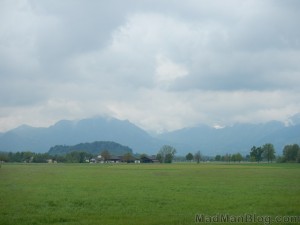 Did you know that Bavarian is an actual language separate from German?!  I had lived in Germany for over a year and traveled the country extensively and I didn’t even know it until I landed in a small town in Bavaria, south of Munich.

Now, let’s talk about the barbarian language of Germany…  🙂

Before I actually lived in Bavaria, I had no idea that they had their own distinct language.  It is an actual language in the southwest of Germany, in Bavaria obviously, and also in Austria, that is spoken often and even written.

My first experience with the language was a rather confusing one.  I was with some really good friends from Bavaria one day in Dublin and we were out making sure to hit up as many pubs as possible when, all of a sudden, my friends started speaking gibberish.  Naturally, I assumed that it was the Guinness in me that was causing this translation issue, as I actually do speak a bit of German.

But, the next day, I came down for breakfast at the hostel and heard the same weird noises coming from their table.  It, however, wasn’t until over a year later, when I came to live with them in Bavaria, that I realized what was actually happening.  They were speaking a new language that I had never before heard of or known about and it was entirely separate from German; they were speaking Bavarian.

When I first arrived in their small Bavarian town in the south of Germany, everything seemed normal and my friends were speaking German to me.  But then, I started to notice something.  When I would go shopping with one of my friends and she would speak to the people at the store, I simply could not understand a word she said.  She was speaking Bavarian when she ordered something or asked a question or was trying to locate a food product.  In fact, she didn’t even know the German words for some of these food items.

I was astounded by the fact that this language was in use so regularly that people from this region didn’t always know the German phrases or words for some things.  It is like its own separate world inside of Germany with its own language, books, and food, and I loved it.

This is how I became acquainted with the language of the barbarians.  Now, they aren’t actually barbarians down there, everyone is rather good looking, but the language itself just sounds so funny and crazy and different than German that it just feels like it is the language that the former barbarians of Germany spoke, haha.

I have to say though, once I realized that this is an actual spoken and written language, I became really excited.  This is a completely separate language from German, although with many similarities, and it is still alive and kicking today.  Even the young people, my friends ranged from 19-26, were able to speak it fluently with each other.  In fact, when it was a room full of Bavarians, half the time, they spoke to each other in Bavarian.

This fact and the fact that I got to hear it first-hand still excites me today because it was something that took me completely by surprise in a land that I thought I knew well.

I will not soon forget the evenings of sitting on my friend’s terrace, eating schweinshaxe, watching the sun set over the Bavarian Alps, drinking Bavarian beer, and listening to everyone speaking in Bavarian.  In a way, this felt like the real Germany, the one I had read about in books and seen in movies, and the one I had dreamed about.