I’m going to tell you which smartphones are best for travelers, what features you should look for in them, and where to buy them, which is oddly difficult in America.

Hint: Samsung is your friend!

Features to Look for in a Travel Smartphone

First, let’s talk about the features that your smartphone must have if you plan to travel with it.  (this assumes that you want a fully functioning smartphone and not just a device for wifi) 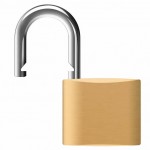 If your phone is not unlocked, you will not be able to use its “phone” features or internet features, absent wifi, with any carrier other than your own.  This is a big problem if you have a phone from the U.S. through a major carrier as they will almost all be “locked.”  This is to keep you using their service forever and if you use a locked phone abroad to make calls, you will usually incur huge fees.

If you want to use your current phone abroad with other phone companies (you will want to do this in Europe for instance) then you need to get the phone unlocked.  You can usually do this through your phone company but they will charge you a fee for this or make you go through other annoying hoops.

If you are going to buy a new smartphone for travel, then try to buy it outright without a contract and without a phone company attached to it. (I explain how to do this below)  When doing this, you still need to make sure your are buying an “unlocked” phone.

Once you have an unlocked phone, you have the freedom to use any phone carrier in the world as long as they will give you a sim card for your phone and it can connect to the network, see next feature. 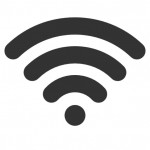 Make sure the phone is Quad Band if you want to use it all over the world.

This allows your phone to connect to four different bandwidths or frequencies, which just means it can basically connect to any country’s networks around the world.

Many phones sold in North America may not be quad band, even if they are name brand.  Make sure your phone has this ability if you plan to travel extensively with it. 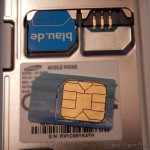 Your phone needs to accept sim cards to be a true travel phone.

Many phones sold in the U.S., depending on the carrier, do not have an actual removable card inside of it which gives the phone its phone number.  They instead use CDMA, whatever the hell that means it doesn’t matter – it simply doesn’t use a sim card.

If you want to travel with your phone and buy sim cards abroad, which allow you to have cheap in-country calls and internet, then your phone needs to first be able to accept sim cards! 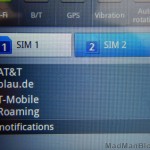 A true travel phone can handle more than one sim card at a time!

Dual sim card phones are simply awesome!!!  I got my first one two years ago when I first started backpacking Europe and I simply love it; I just love it.

This, as the name implies, allows you to place two completely different sim cards in your phone at the same time.  You can make a phone call with one and receive a call from the other one at the same time.  You can use the internet on one sim card while calling from the other one, and lots more.  It basically allows for a wide range of flexibility.

The thing I like most about this type of phone is that I can have one international sim card in there at all times, which allows me to have the same number for my phone no matter where I am in the world in case of emergencies, and put another locally purchased sim card into the other slot in order to have cheap local calls and cheap internet.

Also, this allows for maximum compatibility with foreign markets as I learned when I traveled to Canada.  My “international” sim card did not work in Canada but, oddly enough, my German sim card did work in Canada.  This was invaluable when I needed to use Google maps to find my hostel after dark. 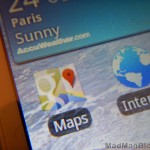 You want your smartphone to have enough power to run Google Maps and a few other important travel applications.

This means that you need to make sure your phone will have enough memory to have these apps on the phone and also to run them.  In my case, that meant not getting the cheapest phone but not the most expensive.  Check the reviews for each phone to see what people say about power and loading apps as the phones themselves change often.

The above is what you need out of your travel smartphone.  These are the must-haves and any other features are optional based on what you want out of your phone. 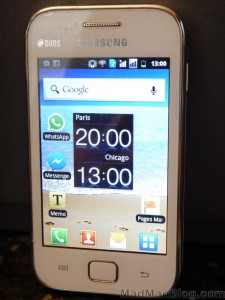 In order to run apps you might not want the cheapest one, but anything other than the cheapest should work fine.

Some good options include these:

Make sure these phones are UNLOCKED!!!!!!!!!  Especially if you buy from the U.S. you want to make sure that the phone says that it is “factory unlocked” or something similar, otherwise you are screwed.

All of these phones are much better than the Samsung I purchased 2 years ago and mine still works and meets all of the feature requirements of a travel smartphone, so it should be easy to find something that works well for you.

But where to buy them?

Where to Buy a Travel Smartphone?

Amazon I love you! 🙂

From Amazon, you can find and purchase the unlocked dual sim card Samsung phones and, often times, have it delivered as quickly as you need it.  In Germany I had mine shipped next-day for 5 euros and it arrived to my hostel without a problem.

Make sure to get a protective case for your phone.  It doesn’t need to be a crazy tough one but you do need one.  My 5 dollar rubber case has kept my phone safe for the last 2 years on the road.

Also, get a screen protector.  It’s a small plastic film that you stick onto your screen.  This cost me just a couple dollars and has helped keep my phone alive and safe during the last 2 years on the road.

I hope this guide helps you!

Any questions?  Ask below and I am happy to help! 🙂