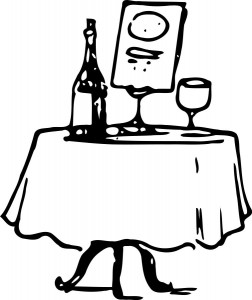 Here, I’ll talk about how I ended up not knowing that I was going on a date until it was too late, after I had come back from living in Germany for a year.

It’s funny how Europe often seems to be so similar to the U.S. on the surface, albeit with a literally different surface full of crazy old buildings and boring new ones, but the real differences, the real contrasts, are really in the small details.

I was probably 17 at the time and a beautiful girl asked me to go to the movies with her.  I love movies and I loved where we were going to go because it was a cool outdoor shopping area, the likes of which many U.S. cities simply don’t have.

This was the first time any girl in the U.S. asked me to go out with her alone, but I didn’t think anything of it.  I had just spent a full year living in Germany, going to a German high school, and being in a German family.  There, it was quite common for me to hang out with a girl for a beer at the local pub, and to do so as a friend.  Oh yea, the drinking age for beer is 16 in Germany!!!  I also went to many movies, where you could also drink legally by the way, with girls who were nothing more than friends.  In Germany, none of this was out of place.  It is so much more common to hang out with the opposite sex as a friend in Germany than it is in the U.S., and I got used to this.

Back to the date.

As you can now see, from my, at the time recent, past experiences, I had no reason, really, to assume that this was a date.  Yes, a girl I met only a couple of times at parties asked me to the movies with her on a Friday night in the nicest and most romantic place in my city, but dum-dum me didn’t get the message.

I showed up to our meeting point and the second that I saw her, I had this huge “Oh ****!” moment.  I was wearing tennis shoes, sports shorts, a regular t-shirt, and of course did not comb my hair, AND I was late.  She was dressed in elegant black pants, wearing a nice v-neck shirt, a light scarf draped over her shoulders, and mid-height black heels.  She also had the perfect amount of makeup, not too much, but just enough to accentuate her beautiful complexion and wonderful smile.

The worst part was that I actually would have LOVED to be on a date with her and so, in a weird way, this was everything I had wanted to happen but never expected to happen.  However, at the same time that I had my surprise moment, she had hers and was, in fact, so embarrassed by the obvious fact that I thought this was a friendly outing that she said almost nothing the entire night and never talked to me again.

Oh the irony.  I actually wanted to go on a date with this girl but didn’t have the courage to ask her out and when she actually asked me out, I thought it was as a friend and, as a result, ended up making the situation so awkward for both of us that we never spoke again.  I can only laugh about it now because it is one of those sad ironies that sometimes happens in life.

After this, I realized very quickly that I had gotten used to German culture and that I needed to reassess how I interacted with girls in America.  This, however, wouldn’t cure my shyness; in fact, it would be many years before I came out of my shell, but that’s another story.

Maybe the sadly funniest part of all of this is that, since that time, I don’t think I have ever had another girl ask me out on a date.

Oddly enough, I still remember this girl’s name and exactly what she looked like that night.  I wonder what would have happened if I had been a little more perceptive and a lot less shy…

That’s life though, so, beers up to that one!