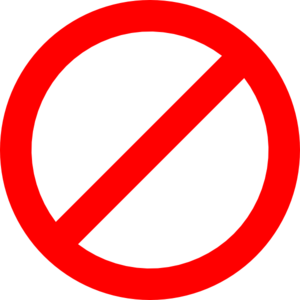 Finland, the last foreign country in which I lived, has country-wide internet censorship; just like China; just like North Korea; just like Great Britain…  As an American this is most troubling.  Here, I’ll discuss my thoughts on censorship and my experience with it.

When you travel through Europe you can be easily amazed by how “free” they are.  The drinking age in Germany is 16 for beer and 18 for everything else; you can drink in public legally in many European countries and it is tolerated in many more; prostitution is legal in many of these countries; some have very permissive drug laws, just look-up Portugal; public nudity, especially on beaches, is allowed in many places; and so on and so on.

But this is perceived freedom.  These countries are not actually so free; they merely seem to be free because of these very public displays of relative freedom mentioned above.

The cold dark truth is that many countries in Europe can and do limit things that we here in America consider to be the corner-stone of any decent democracy, particularly freedom of speech.  Shortly, I will talk about internet censorship, but the concept of censorship often begins with one’s own speech.

(As an aside, one could argue that, during the tenure of President Obama, the freedom of speech in America has been curtailed or at least attacked through the use of the IRS and the Justice Department going after people with whom it does not agree, but, thankfully, and for now at least, this type of behavior cannot be codified into Law.)

In Germany, certain types of speech are expressly forbidden, including certain music, and certain forms and combinations of clothing.  Now, they have a good reason for that, right?  It has to do with trying to keep their history, read Nazi Germany, in the history books.  However, what this leads to is the public accepting the idea that the government can and should ban forms of speech that it deems harmful.  It sets up a precedent by using something that is so evil that everyone can agree that it should be banned, without realizing that the banning itself is the true evil.  What do you think the real National Socialists did when they came to power?  Think maybe they banned anything?

I am trying to make the point that this simple thing, which was done for good, can turn into something very bad.

Once people become OK with the idea of their Government banning speech and the spread of ideas that are deemed bad for them, well, they’re just asking for trouble.

On that note, let’s talk about some things that are bad for the citizenry.  Well, sugary sodas are bad, so says New York City, so maybe we should ban all sugary sodas everywhere, but, more than that, we should also not allow any references to sugary sodas to be made in any form of media, print, television, movies, and of course the internet.  These references should be banned due to the potential interest they may generate in this undesirable item.  Interest in this item may lead to people seeking it out and consuming it.  This is bad for the citizenry because this item can make you fatter.  The fatter you get, the worse your overall health and the more you burden everyone in society due to the reality of socialized healthcare.

As a result of the now direct correlation between references to sugary sodas and their consumption making the whole of the population less well off, you can clearly see why they and any reference to them should be banned.  To prove the correlation even more, simply throw in references to some studies that the government would pay for and talk about the decrease in cigarette smoking since their advertisements were banned and since they were largely removed from popular culture.

Basically, just watch the movie Demolition Man with Sylvester Stallone and you’ll get the point.

By the way, in many countries in Europe, sugary items of all shapes and sizes are taxed more than other items due to this way of thinking.  So I ask, how long before this type of thinking creeps onto the internet?  Well, it’s already here.

When I was in Finland, I found out that some websites, including the Pirate Bay, were completely banned in the entire country.  Now, I don’t use torrents, which are files hosted on the Pirate Bay that allow the transfer of other files between private computers, usually movies and music, but I am aware of this site, as it is probably the most infamous site in the world, and, because of what I mentioned above, I of course disagree with banning it.

Now, you may be saying, “Oh Mr. Traveler, they are simply banning something that allows people to illegally download things.” But the idea is not that they are trying to do what they think is “right” but that this gets people comfortable with the idea that the internet can and should be censored.  One of the worst things that can happen in any society is that its people become comfortable with the idea of internet censorship because, though perhaps implemented for the right reasons, it can turn into something being used for the wrong reason very quickly.

Finland’s censorship of the internet started out in the 2000’s with noble intentions, blocking child pornography on the internet.  Then they apparently started to block some regular pornography websites; then they decided to block the Pirate Bay website.  You can already see how, with one ‘little’ step, this law has morphed to encompass more than child pornography.  And it doesn’t help engender trust when they keep the list of censored websites private, which means you can never be certain that they are only trying to protect you from child pornography, the initial stated intention.  So, where does it end?

There are so many things that can be deemed bad or wrong or inappropriate depending on who is in power.  The last thing we want is a society that is not only used to but also comfortable with internet censorship.  Giving the government the power to make these decisions sets us up for a potentially dangerous future in so far as your access to information is concerned.

This is the page shown in the U.K. when you try to go to a website that is blocked: 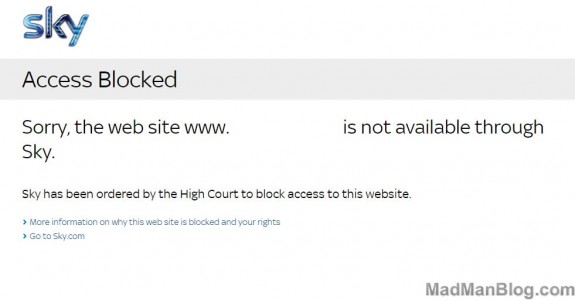 Before you bitch to me about this, read about what is going on in Britain!

Also, check out the documentary on Edward Snowden titled “Citizen Four” – slightly off-topic but well worth it!

So let me know your thoughts on this if you have any!  What do you think is the future of the internet in the western world?