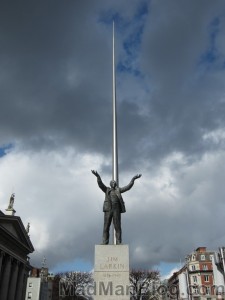 I have been in Dublin, Ireland for over two months now and I have to say that I feel a lot different about this place now than I did after I first arrived here.  When you start to actually live in a city instead of just going through it as a tourist, you see things that you would have otherwise missed; you see the real city.

When I first arrived in Dublin, I felt the same way that I do in every new city, like a wide-eyed kid in a candy store soaking-up everything and taking in all of the new sites and sounds (Gaelic).  I was eager to experience what Dublin has to offer and I couldn’t wait to do it.

Now, for the first few days or so, I felt just like a normal tourist, seeing everything and taking lots of photos.  I had no particular opinion about the people of Dublin or the city itself outside of its history and culture and, generally, the cool things to do here.  This is a pretty normal thing to experience when you are traveling around because you only ever want to see and experience the things for which a city is famous. During the first week in Dublin, I formed an opinion similar to many that I have had for cities around Europe: this is a nice relatively small city which has a lot to offer and is quite fun.

What does set Dublin apart from other cities is the pub culture, number of pubs, number of clubs, and the shear amount of fun you can have on almost any day of the week.  This city seems to have it all and it is located in a country many people find quite interesting, Ireland.

Up to the second week or so I have been enjoying the city, its people, culture, museums, clubs, and pubs.  At this point, I began to settle in and get a taste for the real Dublin.  The only way to understand a city is to actually live there.  A short jaunt will not give you the experiences you need to form a proper opinion of a city.  I have been in Dublin for over two months now; I have many friends here; I shop at the local stores; go to the local pubs; and I enjoy life as a local and am no longer a tourist who is just visiting the city.  Now, I do think Dublin is a really interesting city that is worth a visit, but my opinions of it are jaded by my experiences here.

First though, you should know that most people from all over Ireland will tell you, quite emphatically, that Dublin is NOT representative of Ireland.  I certainly hope this is true.

Let’s go straight to the heart of the problem here – Dublin has a people problem.  There is a massive heroin epidemic here and it is quite visible once you start to pay attention.  However, sometimes you don’t have to look farther than your front step to see examples of this.

In addition to this, many of the people who are from Dublin, “Dubliners”, have serious people problems (not everyone from Dublin is like this of course).  The locals here seem to have a major chip on their shoulder and are very quick to fight anyone who gets in their way.  One night a girl form Dublin grabbed all of the food out of the hand of my friend, also a girl, and threw it on the ground and said to my friend “I’m from Dublin bitch, deal with it!”  Later that night, those same girls beat-up my friend just 20 feet (7 meters) from the entrance to our hostel.

You will see random Dubliners harassing people, especially girls, on the street and causing trouble in stores, either stealing or yelling at the people that work there.  There is a reason that almost every single store, shop, and fast-food restaurant on the main streets will have one or two security guards at the entrance.  I can’t even count the number of times I have seen heroin addicts or young hoodlums kicked out of shops along O’Connell Street.  And, there are more beggars and street-people here per block than I have ever seen in Rome or even Paris.

The clubs (pubs are usually different) are filled with disgusting examples of men and women that are quick to harass you, especially if you are a girl.  The girls themselves all dress like they just finished working the local street corner.  It is an odd experience to go ‘clubbing’ in Dublin.

You can still have a lot of fun in Dublin and you will probably not notice all of this if you are here for a short period of time.  But, these experiences have soured my opinion of the city.

On a less shocking note, some of the less devastating aspects of the city that also serve to erode its standing in my mind include the fact that it seems as though no Irish people live here and that everyone is just passing-through.  Maybe this has to do with the fact that every Irish person I’ve met has said that they would prefer to live outside of or away from Dublin, so you only get non-Irish people who have the desire to live here – or maybe not.

I have now learned that there is such an overwhelming number of foreigners here due to the visa situation in Ireland.  It is one of the few English countries that will give foreigners a work/stay visa or work/study visa without too many onerous requirements.  As such, there are many people from around the world in Dublin.  There is even a lot of mainland Europeans here.  Many of the foreigners come to improve English and all are looking for work and an apartment.  (Inexpensive housing is therefore difficult to come by, but that is for another story.)

I personally think this is kind of cool and I LOVE meeting people from around the world.  Every night here is like a mini-UN meeting, but with a lot more alcohol and friendly conversation. 🙂  But, I kind of thought Dublin would have more Irish people haha.  Where are all my ginger people and leprechauns ;P.  I guess I just expected a city full of Irish culture, heritage, and authenticity.  And, now that I think about it, authenticity is probably what this city lacks most and is what most Irish people complain about when it comes to Dublin.  They say Dublin is not Ireland; Dublin is not authentic.  This is Dublin.

On a less cynical note, I have had A LOT of fun in Dublin.  But I do not think that I would want to actually live here for an extended period of time.

I would like to say that I am very excited to see the rest of Ireland, which I have heard, from every single person I talk to, is much nicer than Dublin.  Dublin is simply not authentic.  Come here for a few days to see some of the sites and at least get a taste for the city, but move quickly to the other parts of Ireland.

I hope I haven’t scared you away from Ireland.  I will be coming back here very soon; but I hope to spend more time outside of Dublin; Galway here I come :).