Naturally, the first thing that you or anyone should do when they get to Rome, or anywhere in Italy for that matter, is to eat.  You’re probably hungry from all of those planes, trains, and well… automobiles.  The FIRST thing that you have to eat when you get to Italy is Pizza.  There is no other option, except maybe gelato, but that’s for another article.

So, let’s get to the pizza!  The first evening that I was in Rome I had a pizza with potatoes and sausage for toppings. 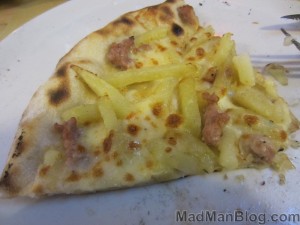 The last thing to notice is that the pizza is thin but with a ‘bubbly’ crust.  However, the crust is not too crispy; it is just right.  It is a thin crust that seems to merely provide a good base for the ingredients that lay on top of it with just the right amount of crisp along the edges of the crust.

In terms of etiquette, know that you are supposed to eat a pizza with a fork and knife.  Now, I’m really not sure what Italians think about the point of having the crust around the side of the pizza if you don’t pick it up with your hands and eat it, but that’s their problem.  As far as I’m concerned, eating a pizza with a knife and fork is about as logical as Italian traffic!

Here is another pizza from my evening out. 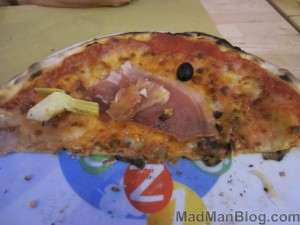 This pizza had ham, artichoke heart, olives, and a hard-boiled egg that was cut in half.  You can’t see the egg in this photo, but it, along with everything else, was just set on top of the pizza.  Also, note that the ham here is not the thick slices of cooked ham that you might recognize in the states.  Here, the like big thin slices that generally seem like they still need to be cooked.

As far as the taste goes, I mean, c’mon, it’s pizza!  It tastes like pizza, just with the ingredients prepared a bit different that they would do it in the states.  The only other potential difference is that most pizzas in the states have a thick and fluffy crust, whereas this crust is thin.

So, of course, the pizza was amazing!