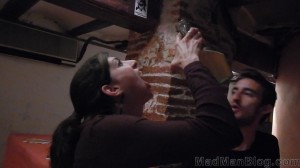 By this point in my travels I am quite bored with the generic questions of “Where are you from?” and “What are you doing in Europe?” and am much more interested in the information that can be classified as an outlier.  I want something that is actually interesting, something that is different from the thousands of people that I have met before you.  (Actually getting this however is more difficult than I thought because, as it turns out, most of us are incredibly similar, following similar patterns, and making similar decisions for similar reasons – but that’s for another article)

As such, I now ask people to tell me something that they wouldn’t tell someone they would have to again see or encounter.  This is such a fun question and yields quite interesting answers.

Back to the bar – When most of the group goes to the toilet, I pose the aforementioned question to one of the remaining girls.  She pauses for a moment, looks down, then starts to play with a lock of her hair as she finally makes eye-contact with me and reveals her secret.  She is a lesbian and has a crush on her travel partner, who is also a girl and who is apparently straight.  In fact, ever since they got really drunk together and hooked-up, which I took to mean kissing and perhaps groping, this girl has wanted her travel companion in a more serious way.

I can’t believe what I am hearing.  This girl has a secret lesbian crush on her travel partner and no one knows about it, except me!

Now it’s time for round two.  The first ‘toilet group’ starts to come back as the second one, including lusting-lesbian-travel-partner, heads off to the toilet.  Her travel companion sits down next to me and I ask her the same question: “Can you tell me something that you wouldn’t tell someone that you ever had to see again?”  There is no way that I am going to hear something as interesting as what I just heard, but I feel that there is still no better question to ask a fellow traveler.

She looks around to make sure that no one but me can hear what she is about to say and then she tells me that she is worried that her friend likes her and wants to get with her; she says that this is the reason that she never drinks too much around her travel partner.  She is worried that if she gets too drunk around her that the girl will try to hook up with her.  The manner in which she says this, with a bit of hesitation and trepidation in her voice, makes it seem as though this has been looming over their entire trip.

At this point, I am freaking out.  I can’t believe that these girls, separate from each other, both commented on the same thing, this thing that could ruin their friendship forever and which hangs over their travels and their relationship as a sort of ominous shadow no more than a few feet behind them as they backpack through Europe together.

So, here I am, sitting down in this bar, with the entire group now back together, and I can barely contain myself.  Both friends are sitting right next to each other, neither knowing about the other’s desires or fears, and I am the only one at the table that knows about it.  It is the craziest feeling in the world and I am just bursting at the seams with excitement.  I am trying as hard as is humanly possible not to show anything on my face as I look back and forth between these two girls to see if they have magically found out what the other said through some sort of female-to-female sixth sense osmosis based communication system.

It takes a minute, but I am able to calm down a bit after a few more drinks from the jug of white wine.

At this point, the tour guides who brought us to the pub decide to go home.  We are now left to our own devices…