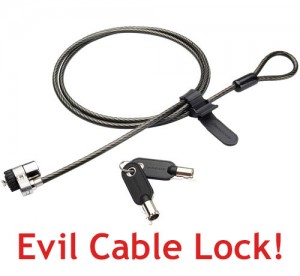 I just went through the security check-point at the airport in Warsaw, Poland (Warsaw Chopin Airport) and I was greeted with a little and, ridiculously thought up ‘rule’ from their version of the TSA…

The mother f**kers took my laptop cable!  The security cable that I use to protect my laptop is apparently a security threat.  I will now quote the moron that inspected my belongings: “It is too thick and long.”  You can imagine my amazement and surprise at being told that the cable was too thick and long to go onto the plane because it was somehow a security threat?!?!?!?!?!?

I had to summon all of the power that I had to restrain myself from asking this moron if my ‘manhood’ was allowed on the plane.

I mean, seriously, airport security is and always has been a total joke.  The failure rate for these security checkpoints is appalling, check out some of the government reports if they are still releasing them.  As well, I can attest to this from personal experience.

I never, read NEVER, take any liquids out of my bag when I go through security.  I almost always have a lot of liquid or similar items in there between tooth paste, medicine from when I had pneumonia, ointment for cuts, and even sun block, and only once have they every stopped me to look through my bags as a result of liquids.  The one time I was stopped was when I had a 350 ml bottle of gin in my bag.  The night before the flight, I was thinking that I would be going out to party but, when the party did not happen, I simply forgot about the bottle in my bag.  So, only with a full bottle of gin in my bag did any security morons throughout Europe or the U.S. (places where I have flown extensively) stop me for having too much liquid in my bags.  In fact, one travel tip that I added to a still unpublished article was to never take liquids out of your bag due to the fact that it is an extra hassle and that the morons that scan the bags almost never find it anyway.

One more quick example (there are many that I have) is from an outdoors type guy that I met somewhere in Europe.  He is from Canada and went on a camping trip for two weeks shortly before starting a month-long trip around Europe.  He proceeded to use the same bag that he took camping to travel around Europe and, only after three weeks of flying around did a security moron at one of the airport checkpoints see that he had a huge hunting knife in his bag.  It took three weeks and I believe 5-7 different flights for an x-ray bag screener to notice a goddamn hunting knife!

But, ya know, my laptop cable is waaaay more dangerous than a hunting knife or way too many liquids that could be something else.  In fact, the moron that took my cable did not notice the bottle of liquids in my other bag…

Airport security exists to give you a false sense of security and, most importantly, to inconvenience you and annoy you to the point that you feel that your government is actually doing something for you instead of preventing the real professionals from protecting the airports.

This is just one more reason why taking a train is so much more enjoyable, usually.

Fuck you airport security!  You do your job as well as a six year old watching cartoons listens to a teacher explaining the components of DNA.