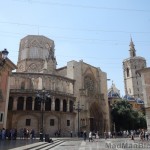 Part 2 of 7.  A Moment in Valencia – Traveling There is the first part of this series.

As I step out of the train and into the station in Valencia I feel a sense of freedom and of starting over.  What happened in Barcelona is now in the past.  New city; new people; new experiences.

I’m taking the metro to my hostel when I notice that it is surprisingly clean, air-conditioned (that’s gotta be expensive for a broke country), and modern.  I arrive at what I later find out is a dried-out river bed that was created when they diverted the flow upstream in the 1950’s.  It’s actually really cool and has been turned into a park.  While walking through the river park thing, which has lots of trees, grass, pedestrian areas, as well as shade from the glaring sun, I feel as though this is where I belong at this moment in time.

Shortly thereafter, I arrive at the hostel, check-in, and make plans for the next day.  I want to go on a free-walking-tour, go to the beach, and wander around to see what else is happening in the city.  At this point, I meet the only other person in my 4 bed dorm.

My roommate is named “Dave”, let’s say, and he is quite the talkative one, all too soon regaling me with some of his exploits from here in Valencia.  Apparently, the other day, he went to a strip club and got screwed out of 30 euro when he purchased a drink for one of the working girls and then felt cheated when he paid 100 euro to another and only received a blow job.  He says that I must go to a proper brothel if I want to have sex with a girl for less than 100 or 200 euro – yea…ok, noted.

He also shows me a video of himself skinny-dipping at a very public landmark after having sex with an 18 year old girl who doesn’t like her 45 year old sugar daddy.  Uhhhh, yea.

I can already tell that this will be an interesting stay – though I’m not into hookers or strippers, just sleep.

Tomorrow will be a big day…