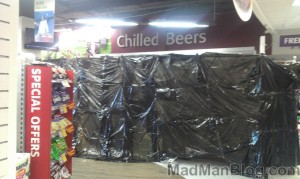 No Beer on Good Friday in Ireland

Everyone thinks that Ireland is going to be a place where the rivers flow with beer and the girls all have red hair.  Let’s address the first part of this.  In Ireland, specifically Dublin since that is where I am currently, beer does not flow freely from the tap.  It is expensive!!!  Read: the beer in Ireland is EXPENSIVE.  And, there are rules for the consumption of alcohol here! RULES haha.  For instance, alcohol can not be sold in stores after 10pm.  This is normal for most places in the west, but it came as a shock to me considering Ireland is known for its drinking culture.

But, back to the point of this article.  Good Friday.

No alcohol was allowed to be served anywhere on Good Friday, at least in Dublin and most likely everywhere else in Ireland.  You were not allowed to acquire alcohol ANYWHERE.

No pub, club, convenience store, grocery store, or anything sold alcohol on Good Friday.  It was kind of odd or, at least, interesting.  Starting 12am Friday to 12am Saturday, no alcohol was sold.  So you could go to a pub and drink on Thursday up to 12am and then you could finish the second half of the night Friday(Saturday) after 12am.

This caused a mini-run on the alcohol stores the day before.  When you went into the stores on Thursday, the shelves of vodka, gin, rum, and cheap beer were all empty.  It was a case of people stocking up on alcohol the day before Ireland went dry.

I thought this was such an interesting occurrence that I just had to share it with you :).