As someone from this planet, I have had Pizza, a lot of Pizza, in my lifetime.  I have had, thin crust, pan, deep dish, and a million different toppings.  I’ve had it in Italy from Venice and Florence to Naples.  I’ve had everything from pineapple to tuna fish to all kinds of disgusting creations on my pizza, even desert pizza (kind of like pizza from heaven).  But, in Bled, Slovenia, I had my first pizza with an egg on it…

So, here is the bad boy: 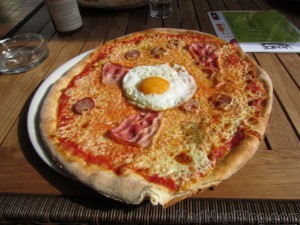 Pizza with an Egg

Before I continue, I want to add one disclaimer.  This was the second day that I ate at this place and had this pizza.  The first day, the egg had been put onto the pizza before it was put into the oven; this time, it looks like the egg was cooked and then placed on top of a separately cooked pizza.  The first method was a million times better!

This is a type of pizza that you can most definitely get outside of Slovenia (though perhaps not so much in the U.S.); however, this is where I first tasted its awesomeness.  The great thing about the egg is that you can break the yolk and let it ooze onto the rest of the pizza, which gets you an amazing pizza and leaves a sort of ‘sauce’ that you can use for the bread.  No crust will be left behind here!

One reason you may not have seen this pizza in the states is because we eat pizza with our hands – Oh My God, the HUMANITY!!!!!!  And, if you don’t use, or even have, a fork and knife to dissect your pizza, putting a sunny-side-up egg onto the pizza will result in a messy affair.  In other words, it just wouldn’t work so well.

But, here in Europe, most people tend to eat their pizza with a fork and knife.  Notice how the pizza above has not been pre-cut into slices?  This is of course true until Europeans are drunk, then, anything goes when it comes to eating pizza.

I must say though, it is very odd to see people cutting their pizza into pieces with a fork and knife and then eating it.  Every time I see someone doing that, I want to ask the person what the hell they think the crust on the end of the pizza is doing there.   Simply absurd to me, but it does allow for some great pizza recipes, like the one above.

Lastly, I must say that, though this was the first, I have since had other pizzas with eggs on them and it did not compare to this pizza, not even close.  This means I am forced to mention that the above pizza, with or without the egg, was amazing.  It was a freshly cooked pizza with fresh ingredients, and was, as you can see, larger than the huge plate upon which it was served.  The egg was merely, almost literally, the cherry on top.  But, it would not have been near as good had there not been a big gooey egg on top of it.

And, now, every time I am eating a good pizza, I think to myself, “You know what? This would be better if it had an egg on top of it.”