One common dish in Italy, which is served as an appetizer, is bruschetta.   To the average American, this is something that may at first seem horrible (it kind of is lol), especially the first time that you see it.  So, read on and figure out what it’s really like.

Now, there are many different variations on this and, in the U.S., you will find it often in snack-form.  But, this is what I’m talking about: 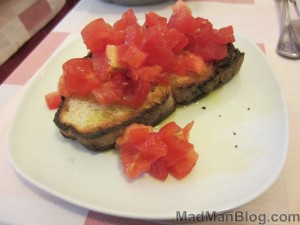 This is a piece of toasted bread, where the crust is quite burned, with olive oil, maybe some garlic, and sliced tomatoes.  You eat this with a knife and fork.

I think the reason this seems horrible to many of us is because we are not used to eating a piece of bread topped only with a mound of sliced tomatoes.  This is also a recurring theme in Italy and Europe – a single piece of bread with some topping served as a meal, appetizer, or breakfast.  I prefer that there be more to my food, a lot more.

However, once you get over the fact that this is just a piece of bread with tomatoes and nothing else, it’s actually not that bad.  However, the quality of this food is heavily dependent upon the quality of the tomatoes used to make it.  Get good tomatoes and this will taste good or acceptable, depending on what you like.

I say have it once in its traditional form and call it a day; move along, not much to see here.